Only in for a Service and MOT?

This little lady has come in for a service and MOT. She is intact, everything is in the right place and all the parts are right, but she has been left standing outside at the mercy of the English elements. The following pictures illustrate what happens when moving parts are not maintained properly.

At this point it's hard to say what the engine's like inside? The 'service' has begun at the front end, a recovery like this needs to be systematic!

Posted by scooter surgery at 06:56 No comments:

Returned from the grave... 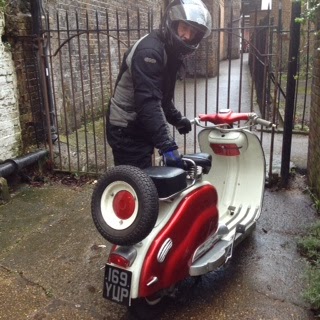 Cameron's LD is nothing short of a miracle!
The point of posting her on this Blog is to show you how pretty she is, how good to look at. She looks no different to when Cameron bought her at auction - but is a testiment to how NOT to be tempted by shiny paint! It was only Patrick's expertise, determination and a little bit of luck that's brought this scooter back from the Lambretta grave in the sky.

She has had to have a complete engine rebuild and it's been a real challenge to get the engine to even run. The engine was only the beginning, everything was wrong with her.

It's not known how the Vietnamese 'restorers' got hold of her or what her history is.  They clearly had a ‘donor’ machine to which they added many 'hand-made parts'... tin cans, bits of scrap metal and other machines (not Lambretta) - just anything to produce something to sell, that would run, although if it did... it was only briefly.
Buyers often fall for these restorations because superficially the scooter looks 'restored' but in reality it's often superficial! the paint work hides a nightmare.

I asked Patrick why he agreed to do her when she was so bad? Essentially he didn't realise the magnitude of the problems until he started to take her apart, once he had, he just had to keep going.  Patrick's now riding her and when he drove up this morning she sounded sweet!  She is back in the workshop for adjustments - everything in her is new and has to be run in.

It's a miracle that she's been saved! Thanks to a lot of luck Patrick was able to source the various parts that are no longer remade.

A video of her running will follow soon.
Posted by scooter surgery at 04:09 No comments: